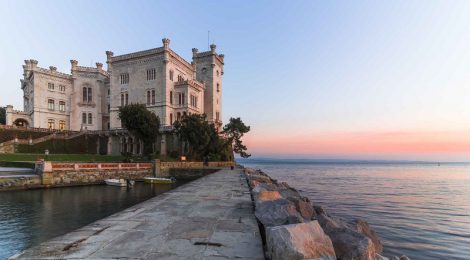 Recollections of an Italian summer

Since my departure from Italy in 1964, I have returned 26 times to my hometown of Vivaro in Friuli (situated in the North-East), including once a year for the past 20 years. I really enjoy spending 2-3 months there in the summer: the days are long, the summer fruit delicious, my many friends and relatives are happy to see me and are most hospitable, my house is comfortable, and there are so many outdoor events to attend that it’s difficult to choose among them – but dancing at the ‘sagre di paese’ is a definite priority!

This year I welcomed three groups of Australian visitors (including poet Mark O’Connor and wife Jan) whom I gladly took around Friuli to show them fabulous spots. Friuli is an under-rated tourist destination that merits consideration by those who have already been to the popular destinations of Rome, Florence, Venice, the Amalfi coast and Sicily.

I should explain that while in Italy I immerse myself in ‘italianness’ to the point that I no longer feel Australian, or think about Australia. I have an Italian identity card and even a ‘codice fiscale’ (tax file number) that’s required for many transactions. I read two newspapers a day – the national Corriere della Sera and Messaggero Veneto that covers the NE, and watch the news on the channels of the national broadcaster Rai.

Here is a summary of the issues that stood out for me:

The weather. Yes – it was hot and humid! Many cities experienced temperatures above 40 degrees and there was evidence of desertification in many parts of the country. There was talk of a record drought: the nine months to August 2017 were the driest since 1800, with 40% less rain than in the past. For a while now the North has been experiencing weather typical of the tropics. In Friuli, for instance, the number of summer storms has increased significantly, and they tend to be much more damaging than in the past. With its strong winds, the storm that hit the region on 10 August caused damages in excess of €138 million, mainly to agriculture.

Politics. More of the same, really. Berlusconi is still prominent in trying to manoeuvre the centre-right despite being unable to stand as a candidate due to past convictions, but his old party of Forza Italia (centre-right) is fractured and a coalition with the far-right Lega Nord seems problematic. The Democratic Party (centre-left) is also fractured. Renzi is no longer prime minister but as head of the party he is trying to heal internal rifts – a difficult task given the intransigence of the far-left faction. Beppe Grillo’s Movimento 5 Stelle maintains considerable support (about ¼ of the country’s votes) but it too has internal divisions.

The economy. Much to the relief of Gentiloni’s government (Partito Democratico), there were definite signs of improvement. GDP was the highest in six years –in the June quarter it was 1.5% higher than in the same quarter of 2016. As for employment, it’s like a curate’s egg. On the positive side, employment has reached the highest levels since 2008. On the negative side, unemployment is still high at 11.3%, reaching 35.5% for young people. Furthermore, there was a drop in stable employment in favour of fixed-term contracts.

This situation, very widespread, creates a feeling of uncertainty that prevents young people from planning their future. Indeed, people in the 25-34 age category have lost the most in the economic crisis.

Tourism. While the contribution of tourism to the economy was strong and celebrated, the media also highlighted many cases of bad behaviour on the part of tourists, such as the three men who dived off the Calatrava bridge in Venice.

Boat arrivals. These included genuine asylum seekers fleeing Syria and other troubled countries, and economic migrants. The number of arrivals dropped significantly during the summer: 3000 in August this year compared with 21,000 in August last year. This drop was attributed to Italy reaching agreements with Libyan mayors – Italy supplies aid in exchange for the mayors stopping the boats. Italy still carries the heaviest weight of arrivals: of the 126,000 arrivals on the European coast in 2017 80% had arrived in Italy, and of the 361,000 arrivals in Europe in 2016, 50% of the people had arrived in Italy. At a recent Paris meeting Angela Merkel made it clear that the whole of Europe needed to share the burden of these arrivals.

Terrorism. The August terrorist act in Barcelona justifiably drew a lot of attention and led to more intense and more visible security in Italian cities. For instance areas where pedestrians congregate in great numbers were blocked to vehicles and well guarded. In Verona in front of the arena I saw several army vehicles, carabinieri, police and soldiers, and I saw a similar thing in the places I visited in Rome – Piazza del Popolo and Piazza di Spagna.

Earthquake at Ischia. A small earthquake hit the tourist island of Ischia, causing two deaths, a number of injuries and a few buildings to collapse. The tourists quickly left and there was an immediate focus on reconstruction. In this context, the media drew attention to a Senate report that had found that the Friuli Venezia Giulia model of reconstruction following the major 1976 earthquake is the only one that has worked well in Italy. Key to the model were ‘the role of mayors and a very active population’.

Australia was almost absent from the news. Apart from being mentioned in the context of our success in ‘stopping the boats’, there was an article on Qantas’s announcement that by 2020 there would be a super-airplane that would reach London from Sydney in 20 hours non-stop; and another article on the government allocation of $280m to eradicate fire ants.

But while in Italy I am also a keen tourist. This year I particularly enjoyed a visit to Turin where I saw an exhibition of Giovanni Boldini’s portraits at Venaria Reale (one of the king’s palaces), went to the top of the Mole Antonelliana and visited its cinema exhibition; and took the opportunity to go to Lago Maggiore and visit Isola Bella which used to be owned entirely by the aristocratic Borromeo family. In Veneto I visited Verona including the ruins of the Teatro romano and the cathedral of San Zeno famous for its bronze door and a large Mantegna altarpiece. In Padua I visited the Palazzo della Ragione, the Basilica di Sant’Antonio and the university, which is the second oldest in Italy having been founded in 1222. Among other things this university is known for the teachings of Galileo; the graduation of the first woman in the world (in 1678 a Venetian noblewoman and mathematician – Elena Cornaro Piscopia – was awarded a PhD) and for having the oldest surviving permanent anatomical theatre in Europe, dating from 1595. In this city I also saw the font where Galileo’s son was baptised in 1606, and the Scrovegni chapel with Giotto’s stupendous frescoes. I was then taken to see Villa Pisani, a palatial Villa Veneta at Stra built for Doge Pisani.

It was acquired in 1807 by Napoleon and in 1814 it was taken over by the Hapsburgs, and was the venue for the first meeting between Hitler and Mussolini held in 1934. It features frescoes by Tiepolo. Finally, as per usual, I spent a day in Venice where I also visited the biennale – the 57th International Art Exhibition where the Australian pavilion featured Tracey Moffatt’s photography. All in all, there was plenty of art, architecture, culture and history to be enjoyed.

In my own hometown or nearby I enjoyed different forms of culture and traditions: theatre performances in the Friulian language; historical recreations of life in medieval times; a religious procession – with the statue of the Madonna – around the streets of Vivaro; and exotic performances at an international folk festival.

One day I got excited when I heard a didgeridoo being played in a portico of a town near Vivaro. As I approached, I realised that the player was not Aboriginal. I then discovered that he was a young Dutch man who had learnt to play the instrument in London, had never been to Australia and had made the didgeridoo with a tree from Holland. But that’s not all: he combined the didgeridoo sound with that of a Tibetan brass bowl caressed with a brass stick. It seems hilarious, but in fact it was a terrific performance. A toy kangaroo appropriately sat next to his busking hat.

But the highlight of my summer was seeing the village of Monte Lussari covered in snow: the day before my visit there had been an early snowfall of about 10 cm. The village looked magical! And whenever I go to Monte Lussari (1790m. high, part of the Julian Alps and reachable by cable car) I drive an extra 15 km to walk around Lago di Fusine, a green lake with the Alps in the background. Nature couldn’t be more splendid!