Browse: Home   /   The cross-roads of Europe A Canberran goes to Trieste 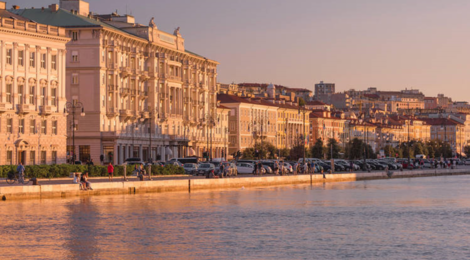 The cross-roads of Europe A Canberran goes to Trieste

Trieste and I collided in September 1982, towards the end of a long Italian summer. As you may know, arriving in Italy is like entering another galaxy. And within that galaxy, Trieste is its own planet. I went there to teach at the new United World College of the Adriatic, an international college deliberately sited in this region where the three great branches of the European family intersect: the Latin, the Teutonic and the Slavic.

My wife and I drove to planet Trieste from England. As we got closer to the city I saw Trst written on a sign. A misprint, surely. Then Duino, which was also labelled Dvin. Was Italy suffering a shortage of vowels for road signs? Finally we arrived at the Collegio del Mondo Unito dell’Adriatico (plenty of vowels in that), located, according to its brochure, ‘at the cross-roads of Europe’, but taking physical form in the picturesque village of Duino with a tiny harbour and beautiful castle, the home of a real prince.

The next morning we started our first day of work at the College. “Trieste is really a Habsburg city,” we were told upon arrival by Eleonora, the upright and dignified personal assistant to the Director of the College. Eleonora clearly wasn’t young. The fact that she could speak fluent German (as well as English) gave rise to the rumour that perhaps she had lived under the Habsburg Empire. It was said that she had a large portrait of the last Emperor, Franz-Josef, at home.

“So are Trst and Dvin Austrian names?” I asked her.

“Of course not,” said Eleonora as though I had sinned. “They’re Slovene.” Suddenly, the photocopier in her office got stuck. Eleonora ran off to Luciana, her young assistant. “Inceppamento” they muttered. Then Eleonora said something else, and glared at the machine.

“Excuse me, what you said just now to the photocopier…it wasn’t Italian, was it?” I couldn’t speak Italian, but I knew what it sounded like.

“Of course not! Why would a photocopier understand Italian? I was speaking Triestino. But you never heard me say it.” Luciana giggled. My head was whirling.

About half the teachers at the College were Italian, and the rest came from all over the world. There was Reinhold, from Vienna, and Carlo from Turin, a small dapper man with a large Sicilian wife. He smoke French cigarettes and read French philosophy books in the staff room. ‘Of course, Trieste is not the real Italy,’ he explained to me at length. Apparently it was too isolated. Possibly from France.

“It’s really Austria-by-the-sea,” said Reinhold, a brilliant musician who held a doctorate in pure mathematics. He invited us to see Mozart’s Così fan Tutte with him. The opera house in Trieste was stunning. With a performance sung in beautiful Italian, in a building named after Giuseppe Verdi, which was located near Piazza Unita d’Italia, I wondered how people could say this place wasn’t Italy.

Andrej, who was Slovene but an Italian citizen, put me right the next day. “Culturally,” he said, “most of this area is really Slovenian. Go into any of the villages round here, and you’ll see Slovene culture identical to what you’ll find over the border in Yugoslavia.”

So is Trieste a Slovene city? “Absolutely”, said Andrej.

“Well, I’d rather think of it as Venetian,” said Maddalena, who taught Italian literature and language. “It even has a grand canal…of sorts.” She giggled. “And of course the original city, Tergeste, was built in the ancient Roman era.”

Siobhan, the Irish teacher of English literature, saw Trieste as the city of James Joyce, the famous Irish writer whom she worshipped. “What about Italo Svevo, the wonderful Italian writer from Trieste?” the Italians cried. “But wasn’t his real name Schmitz?” Hildegarde, the teacher of German, pointed out, before going on to mention the poet Rainer Rilke who wrote the Duino Elegies. Then the history teacher sounded a different note. “Look, guys, this is a mixed-up region. Everyone has passed through. Trieste sits in a strategic position that has been fought over by powerful forces. And there’s been a lot of suffering.”  He was about to organise a trip to the huge military cemetery in Redipuglia, which commemorates the loss and the agony of that region in the First World War.

And to understand that, start with reading Hemingway’s A Farewell to Arms, I was told by the history and literature teachers in unison.

But the physics teachers told me excitedly about the International Centre for Theoretical Physics established in Trieste by the Nobel Prize-winning Pakistani physicist Abdus Salam. Why Trieste? “Because it’s a crossroads.”

When it became too hard to wrap our heads around cosmopolitan planet Trieste, we went swimming in the Adriatic. From the water we could admire the beautiful view across the golfo towards the Castello di Miramare and, beyond it, Trieste and the hills.

The months passed, and in autumn we were advised to visit the famous Carso. But what was it? In winter the locals spoke worryingly of the possible appearance of La Bora. Who was this strange woman? Why did the College’s bursar greet us by saying ‘Mandi, cemut stas tu?’ which was so different from anything in our little Italian language book? And one day Ugo, the friendly chain-smoking cleaner, called me a mule.

Would I ever really understand Europe and its crossroads?