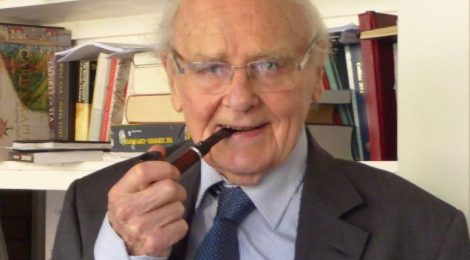 The longest-serving President of the Dante Alighieri Society of Canberra, Em. Professor John Molony, died in September in Canberra, aged 91. He had been President for 17 years from 1977.

Professor Molony was recognised by the Society in 1998 with a copper plaque of the portrait of Dante Alighieri. The President of the Italian Republic had already given him the award of Cavaliere.

In June 2016 I had the pleasure of interviewing him while conducting research for the writing of the Society’s history in view of its pending 60th anniversary. During the meeting Em. Professor Molony recounted his life, his love of history including Italian history, and his recollections of the society during his time.

After studying for the priesthood in Rome and being ordained in 1947, John Molony worked as a parish priest there for three years, moved to the Boston archdiocese in 1953 as an ecclesiastical lawyer, returned to Rome as a priest but in 1963 decided to leave the priesthood and subsequently married. In 1964 he gained a position at the ANU on the strength of his ability “to read medieval Latin and type”, he recalled with a twinkle in his eye. He undertook a PhD in History and was offered the Manning Clark Chair of History when Professor Manning Clark retired. He also recalled that at the time of this appointment he was teaching a course on Italian fascism. (The eminent historian also gave cultural presentations to Dante members, eg on Raffaello Carboni and the Eureka Stockade.)

Plaque presented by the Society to Professor Molony in 1998

Asked about his recollections of the Dante Society, he mentioned that at the time of joining it, it was operating in a manner that did not make it ‘broadly accessible’: firstly, the committee was largely made up of academics; secondly, meetings and activities were held at the embassy – a venue that ‘inhibited’ participation by many Italians. He asked that activities be moved to the new Italo-Australian Club. Committee membership broadened and more people began to attend cultural presentations, including some who had gone to the Club for other reasons. On the question of membership, he admitted to having ‘radical’ views: he believed that the Society should ‘open horizons to the working class’. And on cultural events, he stated that topics were ‘experimental’ in those days, for instance the issue of regionalism and regional cuisines.

Professor Molony authored ten books including The emergence of Political Catholicism in Italy: Partito popolare 1919-1926  (1977) and the autobiographical Luther’s Pine (2004).

The Dante Alighieri Society was delighted he was able to attend its 60th anniversary celebrations in June 2017 at the Italian ambassador’s residence during which our President Franco Papandrea presented him with a life membership certificate.